SPD And Other Disorders

When two disorders co-exist in one person, the phenomenon is known as "comorbidity." The STAR Institute has sponsored and conducted a number of studies into the comorbidity of SPD with other common childhood disorders such as ADHD, autistic spectrum disorders including Asperger's, Fragile X Syndrome, Prader-Willi Syndrome, and other diagnoses.

Children whose Sensory Processing Disorder conforms to the under-responsivity subtype typically require a great deal of stimulation in order to become alert and active, a behavior often seen in children with autistic spectrum disorders. Meanwhile, other children with ASD have symptoms more similar to the over-responsive subtype of SPD. Because Autism and SPD both have over-responding and under-responding categories, Autims and SPD are sometimes mistaken for one another.

The relationship between SPD and Autism is an area of great interest to scientists and families living with the condition. Studies by the STAR Institute suggest that at least three-quarters of children with autistic spectrum disorders have significant symptoms of Sensory Processing Disorder, and probably more depending on how significant symptoms are defined.

However, the reverse is not true. Most children with SPD do not have an autistic spectrum disorder! Our research suggests that the two conditions are distinct disorders just as SPD and ADHD are different disorders. 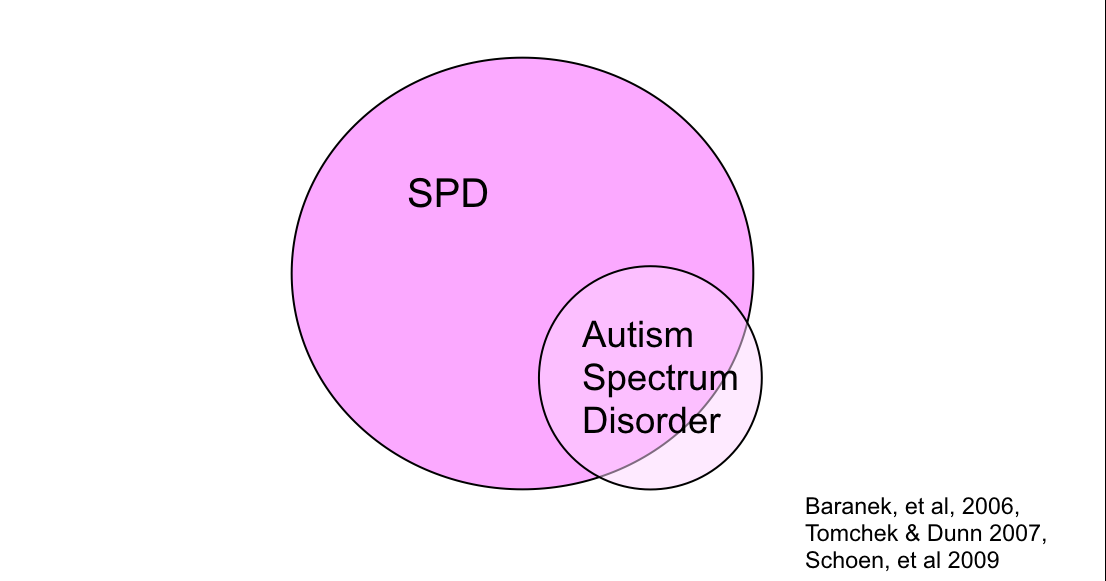 Appropriate intervention relies upon accurate diagnosis. Pursuing an evaluation for SPD by a qualified occupational therapist with sensory integration training facilitates diagnosis that distinguishes autistic spectrum issues from sensory issues. This distinction increases the likelihood that your child will receive the appropriate treatment for his or her neurological conditions.

With further research into the relationship of SPD and autistic spectrum disorders, the STAR Institute hopes to facilitate better more appropriate intervention for all children who have either – or both – SPD and Autism.

Scientists and parents alike are keenly interested in understanding the relationship between SPD and Attention Deficit Disorder (ADHD), a better-known condition that is frequently treated with medication. Although the neurological basis of the two disorders is different, children with the sensory craving subtype of SPD are especially likely to be diagnosed and treated for ADHD because their behaviors are similar to behaviors in children with Attention Deficit Disorder.

Studies by STAR Institute suggest that SPD and ADHD are unique disorders, each with its own distinct symptoms. This means that SPD is not simply a type of ADHD, and ADHD is not simply a subtype of SPD. However, an estimated 40% in the typical population and 60% in clinical samples of the children with one disorder also have symptoms of the other (Ahn et al, 2004).

Appropriate intervention for any disorder relies upon accurate diagnosis. Pursuing a sensory evaluation by a qualified occupational therapist with advanced training in sensory integration training facilitates diagnosis that distinguishes attention deficit issues from sensory issues. This distinction increases the likelihood that your child will receive the appropriate treatment for his or her neurological conditions. Search the SPD Treatment Directory to locate an OT near you.

With further research into the relationship of SPD and ADHD, the STAR Institute hopes to lay a science-based foundation for more precise diagnosis of both disorders, paving the way for better invention for all children with either one.

There is a significant over-lap in symptoms in what is now called “Misophonia” and SPD Sensory Over-Responsivity (SOR). Misophonia describes a neurologically based disorder in which auditory stimuli (and sometimes visual) is misinterpreted within the central nervous system. Individuals with misophonia are set off or “triggered” by very specific patterned sounds, such as chewing, coughing, pencil tapping, sneezing etc. Pawel and Jastreboff termed the disorder in 2001, in an effort to distinguish it from hyperacusis.

Hyperacusis and Misophonia are both disorders related to “decreased sound tolerance.” However, hyperacusis is a condition in which auditory information is unbearably loud. In Misophonia, it is repeating (or patterned sounds) that are intolerable. The Jastreboff’s (2001) originally hypothesized that in Misophonia pattern-based noises trigger an over reaction in the limbic system (where emotions are mediated in the brain). Therefore, auditory stimuli leads to an emotional response that causes the sufferer to feel anger, fear, disgust, or a generally “out of control.” While the Jastreboff’s distinguished between hyperacusis and misophonia via their symptoms, the confusion between the two disorders is far from resolved. The etiology of both disorders is also not clear.

SPD SOR and Misophonia share a remarkable symptom overlap. In both Misophonia and Sensory Over-Responsivity auditory stimuli sets off fight/flight, leaving the sufferer feeling angry, fearful, disgusted and/or “generally out of control” as the Jastreboff’s originally suggested.

The research in Misophonia is in its infancy. However, an impressive body of research in Sensory Over-Responsivity has emerged over the last 15 years. The work in Sensory Over- Responsivity includes numerous physiologic studies demonstrating that upon presentation of sensory stimuli children and adults are propelled into the fight/flight response. Due to the symptom overlap, it is important that misophonia researchers collaborate with SPD researchers in an effort to understand the similarities and differences between the disorders and also to inform the misophonia research in general.

The above information on Misophonia was written by Jennifer Brout Psy.D.