The STAR Institute's Research Center examined the functioning of 98 children at home, school and in the community. The results are among the first evidence demonstrating the efficacy of the STAR treatment model, a sensory and relationship-based approach that pairs direct treatment with extensive parent education and coaching.

The children were measured using the Adaptive Behavior Assessment System II, a comprehensive, norm-referenced tool for assessing adaptive behavior and skills. Intensive, short-term occupational therapy (OT) was provided at STAR Institute. Results show that after 30 therapy sessions, 3-5 times a week, children ages 2-13 improved an average of twelve percentile points across the parent-report scale. Overall, children demonstrated significant change, moving from the ‘below average’ range to within the typical range after treatment.

Behavior problems such as anxiety, attention, hyperactivity and aggression were also measured during the same timeframe using the Behavior Assessment System for Children – 2nd ed., with gains of between 13 and 18 percentile points on all clinical composite scores. Overall, children were reported to have significantly fewer problematic behaviors after treatment.

We are encouraged by these findings showing changes in adaptive behavior and emotional functioning, both of which are directly related to improvements visible in daily life. 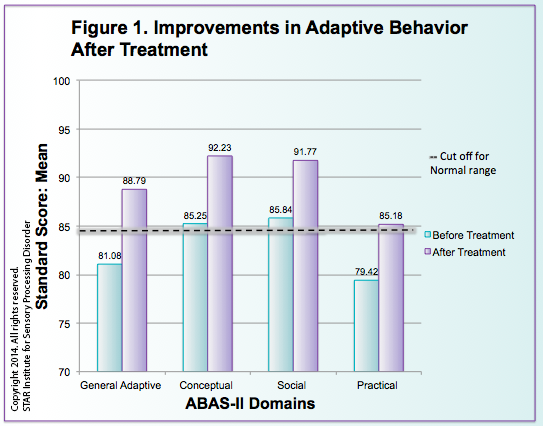 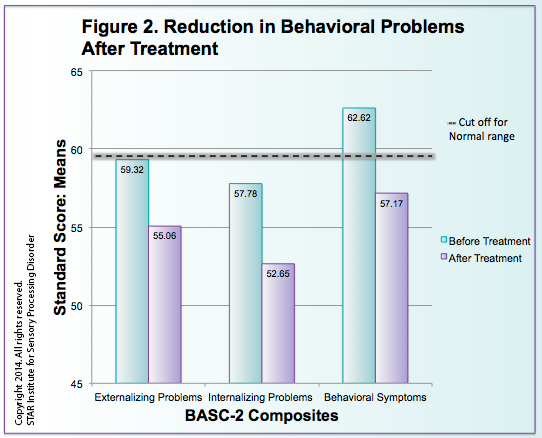