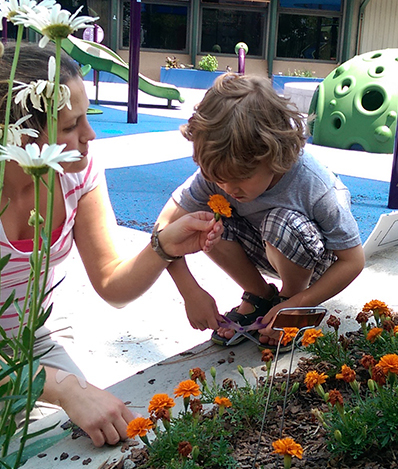 You Have Eight Sensory Systems

(Please note: figures below are from Wikipedia)

DESCRIPTION OF THE EIGHT SENSORY SYSTEMS

7. Proprioceptive (sensations from muscles and joints of body) System

The most recently discussed set of sensations related to internal organs

A.  The five basic sensory systems: 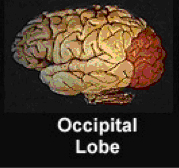 The visual system is responsible for seeing. 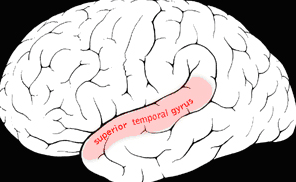 The auditory system is responsible for hearing.

The olfactory system is responsible for processing smell.

The olfactory bulb is located in the most forward part of the brain on the bottom side of the brain (see figure). The olfactory bulb transmits smell information from the nose to the brain, and is thus necessary for a proper sense of smell. Unlike the other sensory systems, the olfactory bulb has only one source of sensory input (neurons of the olfactory epithelium) and one output. Thus it is assumed to be more of a filter than an associative circuit that has many inputs and many outputs.

The olfactory bulb does receive “top-down” information from areas such as the amygdala, neocortex, hippocampus, and others. It has four functions: 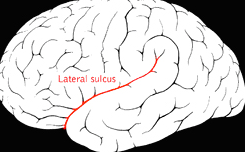 The Gustatory system is responsible for the sense of taste.

It allows us to discriminate between safe and harmful foods. Usually, individuals prefer sweet and salty tastes to sour or bitter tastes. Detecting salt is critical to keeping a regulated and stable internal body environment. This taste is perceived positivity because it facilitates re-uptake of water into the blood. Since it helps survival, salt is perceived as a pleasant taste by most humans.

Sour taste can be good in small quantities, but when it gets too sour it becomes unpleasant to taste. This has occurred through evolution to protect us from eating over-ripe fruit, rotten meat, and other spoiled foods (dangerous because of bacteria which grow in these environments).

The bitter taste is almost completely unpleasant to humans. This is because many dangerous pharmacological agents taste bitter, including caffeine, nicotine, and strychnine. Some bitter tastes can be overcome (note how popular Starbucks is world wide! Also note how many medicines when chewed, have a bitter taste, apparently being interpreted by our bodies as poisons.)

Sweet taste signals that carbohydrates are present. Carbohydrates have a high calorie count and are desirable (humans in the distant past did not know when their next meal would occur, so they evolved to want/need to eat sweet tastes.)

The primary gustatory cortex is located near the somatotopic region for the tongue, in the insular cortex deep in the lateral fissure with the secondary taste areas in the opercula (see figure). This means the location is folded deeply within the cortex within the lateral sulcus between the temporal and frontal lobes. 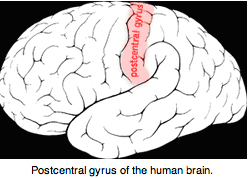 The tactile system is responsible for processing touch information from the body.

The body sends tactile information to the somatosensory cortex through neural pathways to the spinal cord, the brain stem, and the thalamus. The primary somatosensory cortex is the primary receptive area for touch sensations and is located in the lateral postcentral gyrus, a prominent structure in the parietal lobe of the human brain.

Due to its many connections to other brain areas, the somatosensory cortex is the part of the nervous system that integrates touch, pressure, temperature, and pain.

The tactile system is extremely important in SPD. Many individuals with the disorder have tactile symptoms such as tactile defensiveness or under-responsivity to touch and pain. The touch system is one of the three foundational systems used in sensory integration treatment.

B.  The three sensory systems Ayres focused on in describing the treatment of sensory integration dysfunction:

The vestibular system contributes to balance and orientation in space. It is the leading system informing us about movement and position of head relative to gravity.

The vestibular system sends signals primarily to the neural parts of the brain that control our eye movements, and that keep us upright.

The vestibular system contains three semicircular canals, which are approximately at right angles to each other:

the horizontal canal, which detects rotation around a vertical axis (as when you do spins in ice skating),

the anterior semicircular canal, detects movement in forward/backward plane as in a nodding movement,

the posterior canal, detects movement in a frontal plane as in when cartwheeling.

The canal on each side has an almost parallel counterpart on the other side. Each pair of canals works in a push-pull fashion: when one is stimulated, its partner is inhibited. Together the partners allow us to sense rotation in all directions.

Emphasis on the function of the vestibular system comes from Ayres influence when she identified sensory processing disorders as a new condition. This sensory system has a broad influence in many parts of the brain projecting to:

The information above is only a simple introduction to the role of the vestibular system as it relates to SPD. The figure below depicts the complex vestibular system. This figure is in the public domain from Gray’s Anatomy (book). 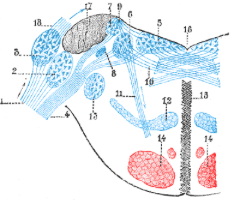 The proprioceptive system (sometimes abbreviated as “prop” by therapists when they talk about it) senses the position, location, orientation, and movement of the body muscles and joints. Proprioception provides us with the sense of the relative position of neighboring parts of the body and effort used to move body parts.

Proprioception is activated by input to a proprioceptor in the periphery of the body. The proprioceptive sense combines sensory information from neurons in the inner ear (detecting motion and orientation) and stretch receptors in the muscles and the joint-supporting ligaments for stance.

Proprioception was felt by Ayres to be the foundation (with vestibular impairments) of SPD. It is one of the three sensory systems used by SI trained therapists as the cornerstone of the sensory aspect of advanced treatment.

Temporary proprioceptive impairment is reported during times of quick growth, mostly during adolescence. Other large increases or drops in bodyweight/size due to fluctuations of fat (e.g., liposuction) and/or muscle content (e.g., body-building) also affect proprioception.

Proprioception is occasionally impaired in typically developing individuals, for example, if you are tired. Generally speaking we do not notice out proprioceptive sense because we disregard through habituation, desensitization, or adaptation sensory stimuli that is continuously present. In essence, the habituation makes the proprioceptive sensory impressions disappear. One practical advantage of this is that unnoticed sensation continue in the background while an individual’s attention can move to another concern.

Temporary impairment of proprioception has also been known to occur from an overdose of vitamin B6 and or by cytotoxic factors such as chemotherapy.

The eighth, often neglected, but frequently problematic sensory system in SPD is the Interoceptive System. Interoception refers to sensations related to the physiological/physical condition of the body. Interoceptors are internal sensors that provide a sense of what our internal organs are feeling. Hunger and thirst are examples of interoception.

Interoception detects responses that guide regulation, including hunger, heart rate, respiration and elimination. The Interoceptive stimulation is detected through nerve endings lining the respiratory and digestive mucous membranes. Interoception works the vestibular and proprioceptive senses to determine how an individual perceives their own body. Well-modulated interoception helps the individual detect proprioceptive and vestibular sensation normally. For example, if a person feels his/her heart pounding, while it is not comfortable, trauma from the stimulation is not likely; nor will the stimulation be craved. The same is true for hunger and thirst, as well as the feeling of the need to urinate or have a bowel movement.

Interoception is associated with autonomic motor control, and is different than mechano-reception (in the skin) and proprioception (in the muscles and joints). Interoception is located in the dorsal posterior insula and it creates distinct feelings from the body including pain, temperature, itch, muscular and visceral sensations, vasomotor activity, hunger, thirst, and the need for air. In humans, the primary interoceptive activity occurs in the right anterior insula, which provides the basis for subjective feelings of ones’ emotional awareness.

Some researchers believe that our perceptions of well-being, energy and stress are based on sensations representing the physiological condition of our bodies. They suggest that interoception is a foundation subjective feelings, emotion and self-awareness. There is evidence that the anterior insula-cingulate system may integrate Interoceptive information with emotional salience to form a subjective representation of the body; while the mid-cingulate cortex, are more likely involved in environmental monitoring, response selection, and body orientation (see Taylor KS, Seminowicz DA, Davis KD (2009). Two systems of resting state connectivity between the insula and cingulate cortex. Human brain mapping, 30(9), 2731-2745). 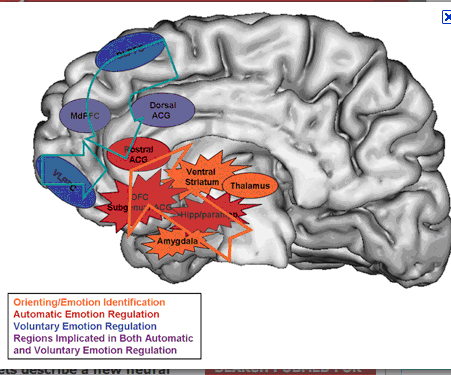 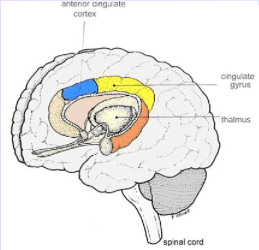 See below for general diagram of the neuroanatomical locations noted in above descriptions. The brains depicted below are shown from a side view with the nose pointing to the left.